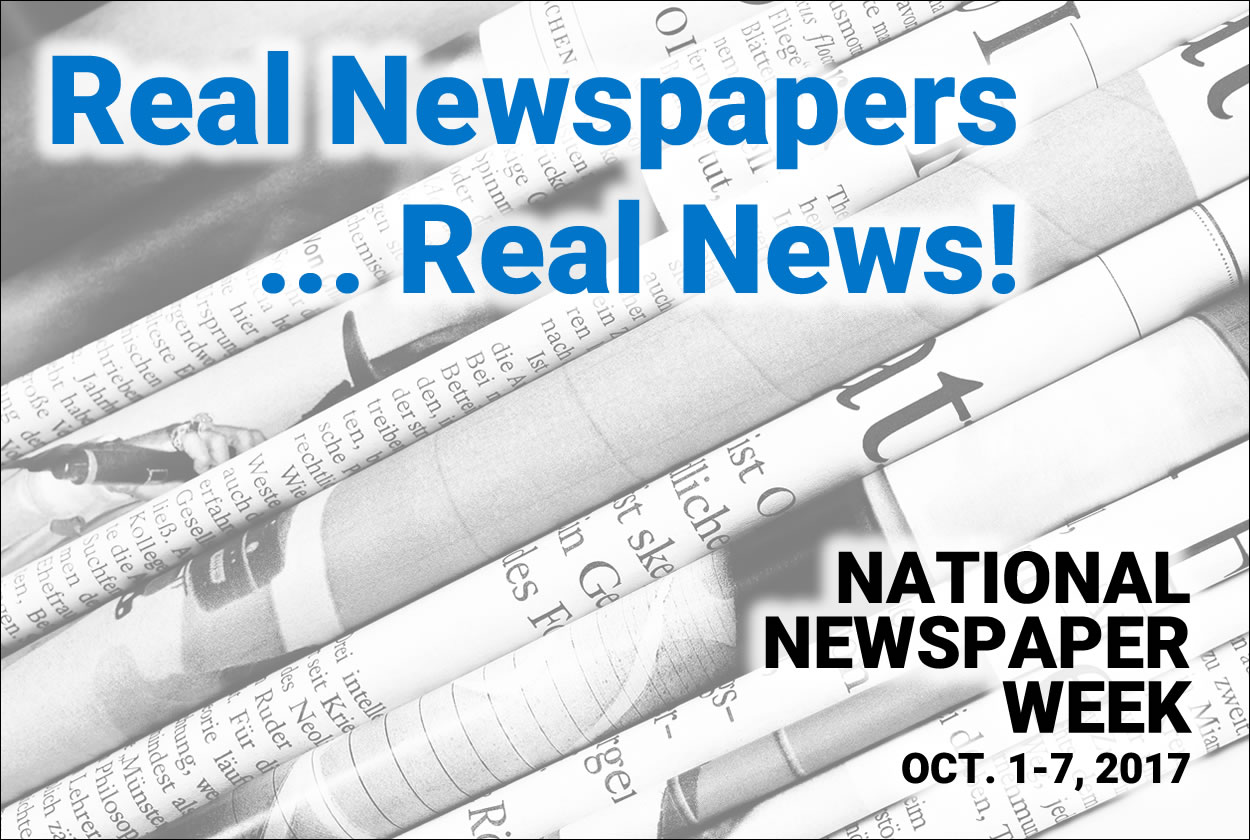 We have the tools to find the facts

A lot of words have been published, posted and uttered recently about fake news and real news and whether Americans have the tools necessary to differentiate between the two. This year’s theme for National Newspaper Week – “Real Newspapers … Real News” – couldn’t be more fitting to frame the question: Do Americans have the tools necessary to decide for themselves what is real, what is factual and what is necessary for self-government to endure and the country to prosper?

I submit that they do. The tools are American Newspapers, dailies and weeklies, printed and delivered to American doorsteps and accessed on laptops, tablets and smart phones. Real newspapers in all their formats are created by real journalists, and that’s the key.

Welcome to the 2017 National Newspaper Week website. After I became chair of this year’s effort, a colleague here at the California News Publishers Association, which represents over 1,300 California daily, weekly and student publications and all their diverse platforms, broke out the history books in the form of bound editions of CNPA’s newspaper, The California Publisher. It seems that National Newspaper Week, officially begun 77 years ago in 1940, was built from a California effort dubbed Newspaper Appreciation Week, begun six years earlier. H.R. Judah of the Santa Cruz Sentinel chaired the fledgling Newspaper Appreciation Week Committee and sent letters to all California publishers urging a commitment to the effort.

He got their support, and one letter in response to the call to action, written by Fred B. Hitchings, publisher of the South Antelope Press, precisely captures the spirit and energy necessary to make this type of endeavor a success:

“Permit me to remark that it is now time, and has been for a long time, for the publisher to divest himself [they were nearly all ‘him-selves’ back then] of the cloak of modesty, shake off this inferiority complex, and tell the cockeyed world that we are more than it ever dreamed.”

The California Publisher reported in August 1940 that on October 1-8, a Nationwide Newspaper Week, where “the entire press can organize in a united front to impress American readers with the reliability, integrity and enterprise of their newspapers, is being sponsored by the Newspaper Association Managers, with plans already underway.”

Seventy-seven years later, American newspapers are demonstrating their resolve each day to help readers determine fact from fiction and to inform the nation of all the important news and issues. Join me and all my colleagues at the Newspaper Association Managers in support of this effort to highlight and celebrate all that newspapers do in support of a free people. Please use the new and archived materials on this site to celebrate your newspaper’s unique story and importance to the community. Thank you for being a part of National Newspaper Week 2017. Together, we are more than the public ever dreamed.

The content kit below contains editorials, editorial cartoons, promotional ads and more; all available for download at no charge to daily and non-daily newspapers across North America. NNW is sponsored by Newspaper Association Managers, Inc., the consortium of North American trade associations representing the industry on a state and provincial, regional and national basis.

This year’s theme is “Real Newspapers … Real News!” The aim is to applaud and underscore newspaper media’s role as the leading provider of news in print, online or in palms via mobile devices.

PLEASE ALSO MAKE IT LOCAL by editorializing about your newspaper’s unique relevance. This can be about your government watchdog role, coverage of community events, publication of timely public notices, etc.

Thank you for supporting National Newspaper Week. You already know there is power in association. And the same principle holds when associations like ours band together to provide even greater impact – both directly to newspaper members locally and collectively to the overall industry nationwide.

We deeply appreciate your participation and support of National Newspaper Week.

NEWSPAPERS ARE ENCOURAGED to replace the “National Newspaper Week” line at the bottom of the house ad with their own flags or logos.

“Your local newspaper: The real deal”

Column by Gene Policinski, chief operating officer of the Newseum Institute and of the Institute’s First Amendment Center. (Originally published in 2015; not date specific. Approx. 800 words).

Promote the importance and value of public notice advertising in your newspapers with these ads courtesy of the Public Notice Resource Center.