Thank you for visiting the home page of National Newspaper Week. This year’s observance will be held Oct. 7-13.

This 78th annual National Newspaper Week is a recognition of the service of newspapers and their employees across North America and is sponsored by Newspaper Association Managers.

This year’s theme is “Journalism matters. NOW more than ever.”

PLEASE ALSO MAKE IT LOCAL by editorializing about your newspaper’s unique relevance. This can be about your government watchdog role, coverage of community events, publication of timely public notices, etc.

In a career spanning nearly five decades, Dave Zweifel, editor emeritus of The Capital Times of Madison, Wisconsin, has been an articulate and tireless advocate for the people’s “right to know” the workings of their government and how its actions affect their daily lives.

Matt Geiger is an executive editor with News Publishing Co. He is the winner of numerous journalism awards, and his debut book, a collection of humorous newspaper columns, won a Midwest Book Award and was named as a finalist in the Next Generation Indie Book Awards and the American Book Fest. He lives in Mount Horeb, Wisconsin.

“Your journalism has never been more important”

Rusty Cunningham is executive editor of the La Crosse (Wisconsin) Tribune and River Valley Media Group, part of Lee Enterprises. A fourth-generation journalist, Cunningham has held his current role since 2015 after being editor of the Tribune from 1997 to 2002. He also previously served as publisher for the Tribune, the Winona (Minnesota) Daily News and the Chippewa Herald in Chippewa Falls, Wisconsin.

“Journalism under attack when needed most”

Sid Schwartz is editor of The Gazette in Janesville, Wis. He has been a journalist for 34 years. He previously served as president of the Wisconsin AP Editors Association and on the board of directors of the Associated Press Managing Editors.

“Journalism matters in your community”

Jim Zachary is the deputy national editor of CNHI and editor of the Valdosta Daily Times in Georgia. He also is president and chairman of Red & Black Publishing Co., serving the University of Georgia, and vice president of the Georgia First Amendment Foundation. Zachary has won numerous awards for defense of the First Amendment, open government advocacy and editorial writing.

NEWSPAPERS ARE ENCOURAGED to replace the “National Newspaper Week” line at the bottom of the house ad with their own flags or logos. 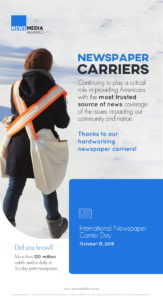 In an effort to support National Newspaper Week, the WNA is sharing the following editorials that are available for republication with attribution or to be cribbed for use in your own editorial. Also listed are resources for newspapers looking for statistical or anecdotal information on recent attacks on press freedom.

»This is not fake news – Korrie Wenzel, Grand Forks Herald 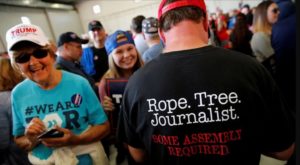 »Time to stand up for a free press: We’re not the enemy – Layne Bruce, Executive Director of the Mississippi Press Association

Attacks on the Press

In the Committee to Protect Journalists 2017 edition of Attacks on the Press, journalists, academics and activists provide their perspective on global press freedom. 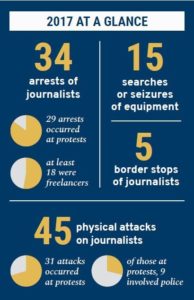 Launched in 2017, the U.S. Press Freedom Tracker documents incidents in the United States that threaten press freedom. It was launched following increasing hostility in recent years — stoked by virulent attacks from politicians — after more than two dozen press freedom groups recognized the need for “constant vigilance and an honest accounting of the country’s record on press freedoms.”

Download the report released earlier this year that surveys the 2017 data from the Press Freedom Tracker. Of the 122 incidents threatening press freedom that the tracker logged last year, nearly half occurred at protests, where journalists faced physical attacks from police and demonstrators, were arrested by law enforcement, and had their equipment seized and, in some cases, searched.

Journalists and news organizations in the U.S. face a range of intensifying challenges that threaten their right to freedom of the press, according to a report launched in May. The report is based on the unprecedented press freedom mission to the U.S. that took place in January, which was organized by CPJ and IFEX, and included ARTICLE 19, Index on Censorship, International Press Institute, and Reporters Without Borders.

America is no longer the standard bearer for a free press

Bruce D. Brown, executive director of the Reporters Committee for Freedom of the Press, wrote a column in February for Time magazine detailing the IAPA mission to the U.S. for meeting with legislators, policymakers and the American media about the undermining of press protections in this country.